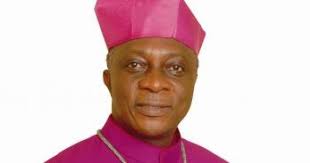 The Metropolitan Archbishop of Lagos, His Grace, Most Rev Dr. Alfred Adewale Martins has reiterated that for Nigeria to successfully toe the path of growth and development, it must, of essence, be restructured along true federalism as the current bloated structure of governance had become obsolete.

In his 2017 Christmas Message made public through the Director, Social Communications, Catholic Archdiocese of Lagos, Msgr. Gabriel Osu, Archbishop Martins warned that any attempt by the political class to jettison the full restructuring of the country as is being clamoured for by the masses and members of the civil societies, would not only set the nation back, but may equally constitute a clog in the wheel of the successful execution of the 2019 elections.

While noting with dismay that the political class, including the ruling party has since commenced their usual flurry of activities ahead of the 2019 election, Archbishop Martins called on Nigerians not to allow themselves to be deceived anymore by mere rhetoric and promises but to insist on the building of appropriate and realistic political structures that would help guaranty that they enjoy access to good quality of life and self actualization in line with God’s plans for His creatures.

Archbishop Martins equally frowned at the recent inhuman treatment being meted on Nigerian immigrants and those of other African countries by some Libyans and their collaborators who sell them into bondage for monetary gains. According to him, such indignity being meted on Africans by fellow Africans, is not only repulsive and evil, but a clear indictment of the leadership for failing to provide the enabling environment for African youth to have access to basic necessities of life.

He therefore wants the Nigerian government to as a matter of urgency declare a state of emergency on the economy so as to rescue the nation out of the woods and set-up a realistic road map that would stabilize the naira and help the private sector create viable industries that would provide adequate job opportunities for the teeming youths who are growing more restless by the day.

“We need to be true to ourselves. We cannot be talking of 2019 when little is being done at the moment to address the rot in the system. Our people are going hungry daily, our youths are dying in their quest for better options to life outside our shores and yet our leaders appear more concern with how to clinch to power. I think the time has come for all of us to reason together to resolve and restructure the current the lopsided political structures we are currently operating and set up realistic goals that would help move us forward. Except all these are given top priority, I fear that the 2019 election may end up a mirage, after all.”

While congratulating all Christians on the occasion of the birth of Christ, Archbishop Martins reminded them to always put their trust in Jesus Christ who is the reason for the season, noting that the season of Advent should also enable us to prepare with hope and expectation for the second coming of our Lord and saviour, Jesus Christ.